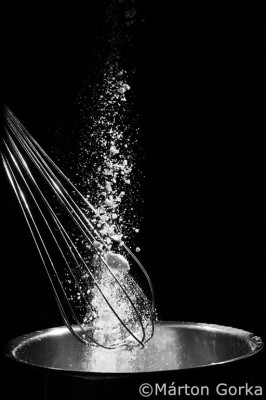 This post is one of my first guest posts ever to diyphotographystuff.info. Its written by Márton Gorka (facebook page) a Hungarian amateur photographer who’s images I saw on flickr and asked him to share some of his wisdom with you guys.

The image idea first  came up when I saw a Benoit Linard image doing something similar on other site, he used flour and I decided to try create something with the same mood. I wanted to capture an illusion of pouring flour (white) as the background is dark black that’s where the name (“midnight cooking”) for that setup came from. So lets start! 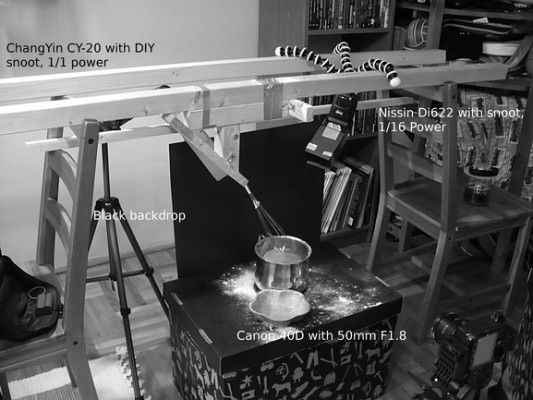 Building the seup I used some wood poles, taped together with some duct tape, I actually ordered some lighting stands from eBay, but didn’t imagine how long the shipping time will take, so I had to improvise… The whisker hanged down of a wooden structure I put together, I have the impression you guys can find more ways to hold the whisker, just be creative!

just under the whisker.

I used here two budget flashes and positioned them the way you can see in the setup image:

As youl’d do in any situation, started to play with the caemra and flash settings until I got my desirred image. Pressing the shutter with one hand and pouring the flour with the other. Some really basic Image editing done with GIMP (convertiong to B&W and some curves&sharpening ). 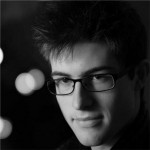 Well this is it, I hope this one will get you started just like Benoit’s image got me started.

How To Photograph Reflective Silver Producs

You have not selected any widget for this sidebar. Go to your widgets section and select widgets.